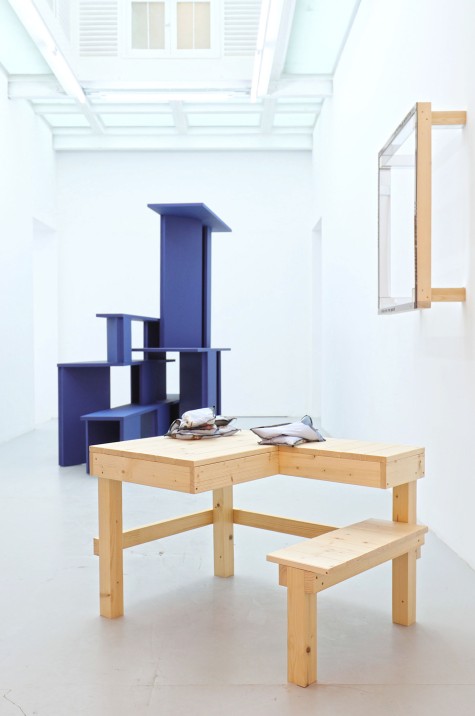 For his solo exhibition, except for access only at Malta Contemporary Art, Tom Van Malderen presents a series of objects that due to denominations of scale, materiality and context sit somewhere between sculptural objects and architectural models – at a juncture between the field of architecture and that of art. While many of the reflections that have made their way in the exhibition can be traced back to architecture, they feel equally relevant and stimulating when brought into an art context.

The humorous exhibition title – except for access only – lifted off a DIY sign that was found in the Maltese countryside is a misconstrued phrase made up by someone who, so intent on denying access, merges ‘except for access’ and ‘access only’. The result is humorous, yet we are aware that it masks a graver gesture: territorialising public space. It is this vacillation between levity and gravity that marks Van Malderen’s tone throughout the exhibition.

Isolationism and segregation are further explored in ‘Frozen Target shooting playset’, a timber structure that is essentially a copy of popular blueprints for DIY target shooting tables found online that is then scaled to fit a child. Drawing upon unofficial militarized designs that are found in decentralized, interstitial spaces Van Malderen questions the relationship between the eroding demarcation of public and private space and the growing need to segregate and mark one’s own territory, also observable in the rising number of gated communities, special economic zones and tax havens.

‘Gazebo (monument for the public-private space)’ questions the loss of public space. Its vaguely ambiguous status, caused in part by its 1:5 scale is further highlighted by its design – a reduced and to a certain extent archetypal form of the gazebo.

A search for its etymology yields multiple sources; a Muslim quarter in Algiers, Casbah; Cordoban poet, Ibn Quzman’s use of ‘qushaybah’ and an 18th century architect who added, in jest, the Latin suffix –ebo to the verb ‘gaze’ as if to highlight its function as a point of observation. Notably, few objects divide public and private space more markedly than the gazebo structure, which has always existed in either public or private, privileged spaces. Nowadays cheap and quick to assemble polyester gazebos are in many ways a marker of the times. Van Malderen’s acrylic and marble structure reassesses the value attributed to materiality and skill – pitting these two qualities subtly against the outsourced and the mass consumed.

Perhaps one of the most beguiling works is ‘ERNST (Neufert) I’ – a direct reference to Ernst Neufert’s seminal publication, Architects’ Data[1]. The 1936 publication outlines ways of attaining an optimal balance between maximum space efficiency and minimum space requirement. It is quite telling that some of the proposed norms linger on, reaffirming the allure of normative rules and the equally strong desire to do away with them.

‘ERNST (Neufert) I’ presents us with a selection of industry standard heights; 40 cm for a bench; 75 cm for a desk; 85 cm for an exhibition table, 110 cm for a desk counter; 220 for the height of an Ikea bookcase and yet the work itself surprises with its unexpected spatial arrangement. The whole structure is hand-painted using a RAL 5013 blue that resembles the hue found in bleu-print, a technology that can rapidly reproduce industrial and construction documents, disseminating as it were these industry norms and regulations.

By using architectural and design principles, Van Malderen builds structures that open up a reflection on the value we place in functionality and excellence or how, for instance, the need for protection is morphing into isolationism and exclusion. The wry, reconfigured structures in except for access only reveal a need to communicate logically, yet with sentiment, yearning for a neutral and impersonal space intended for a sentient being. 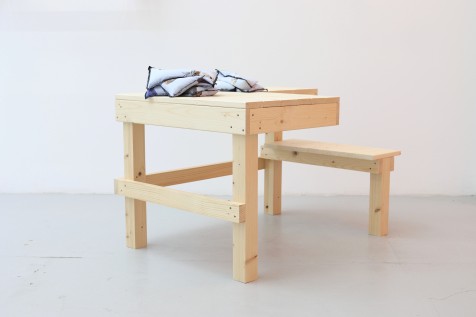 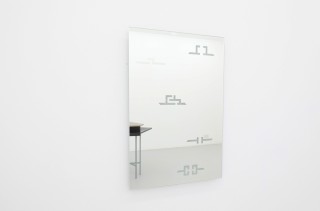 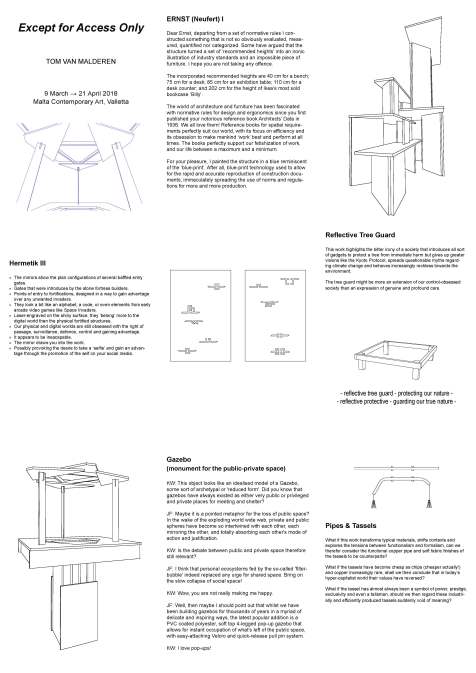 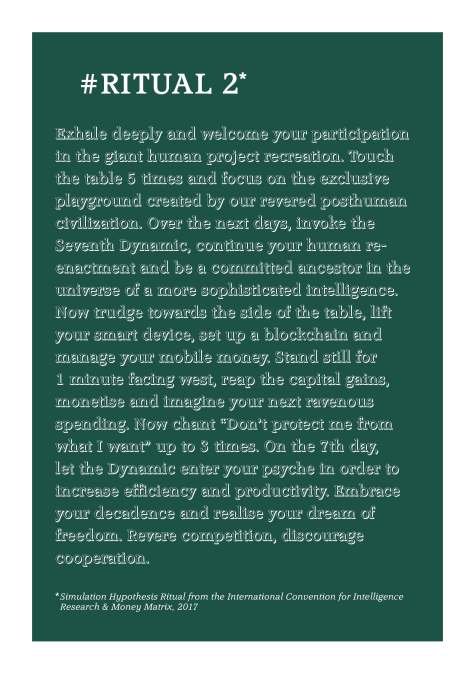 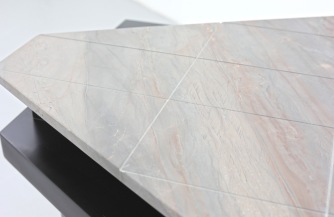